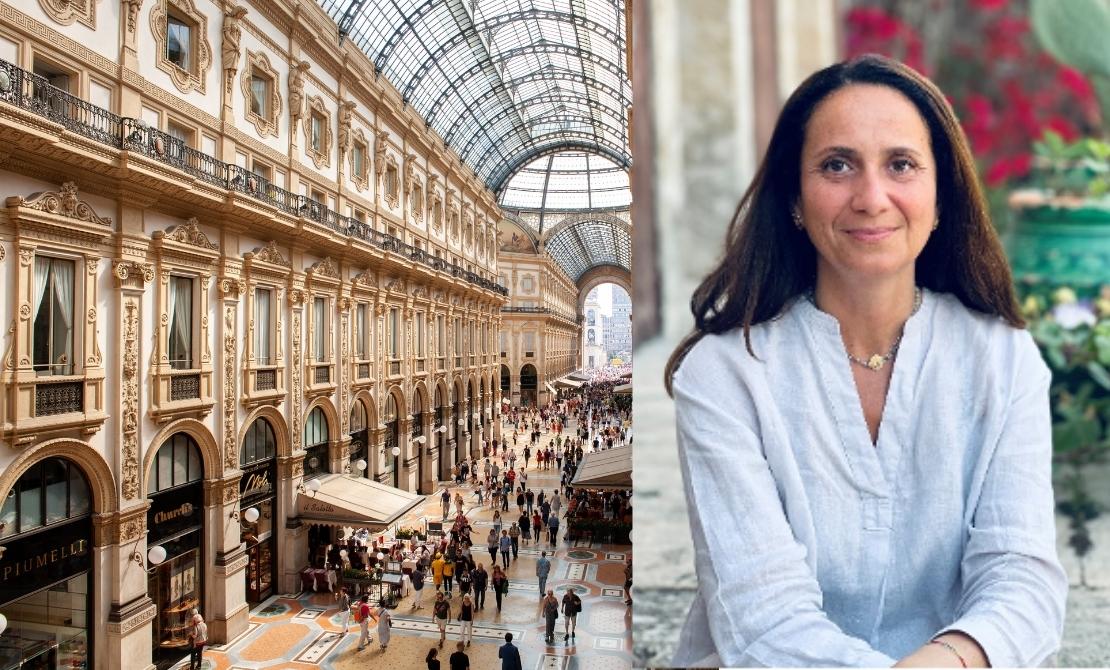 (EN) Alessandra started her career in PR at Interax in her hometown of New York City. With over 25 years of experience in companies such as AON, Missoni, Il Pellicano, and Hotel Principe di Savoia of Dorchester Collection, Alessandra is currently in charge of public relations and communications at the boutique firm Luxury Collective Studio. Since 2000, she has made Milan her home and enjoys exploring the city on foot and bicycle, reading, and going to the movies. Here, she shares her essential haunts.

What must one do, see, eat, visit, and buy when in Milan? 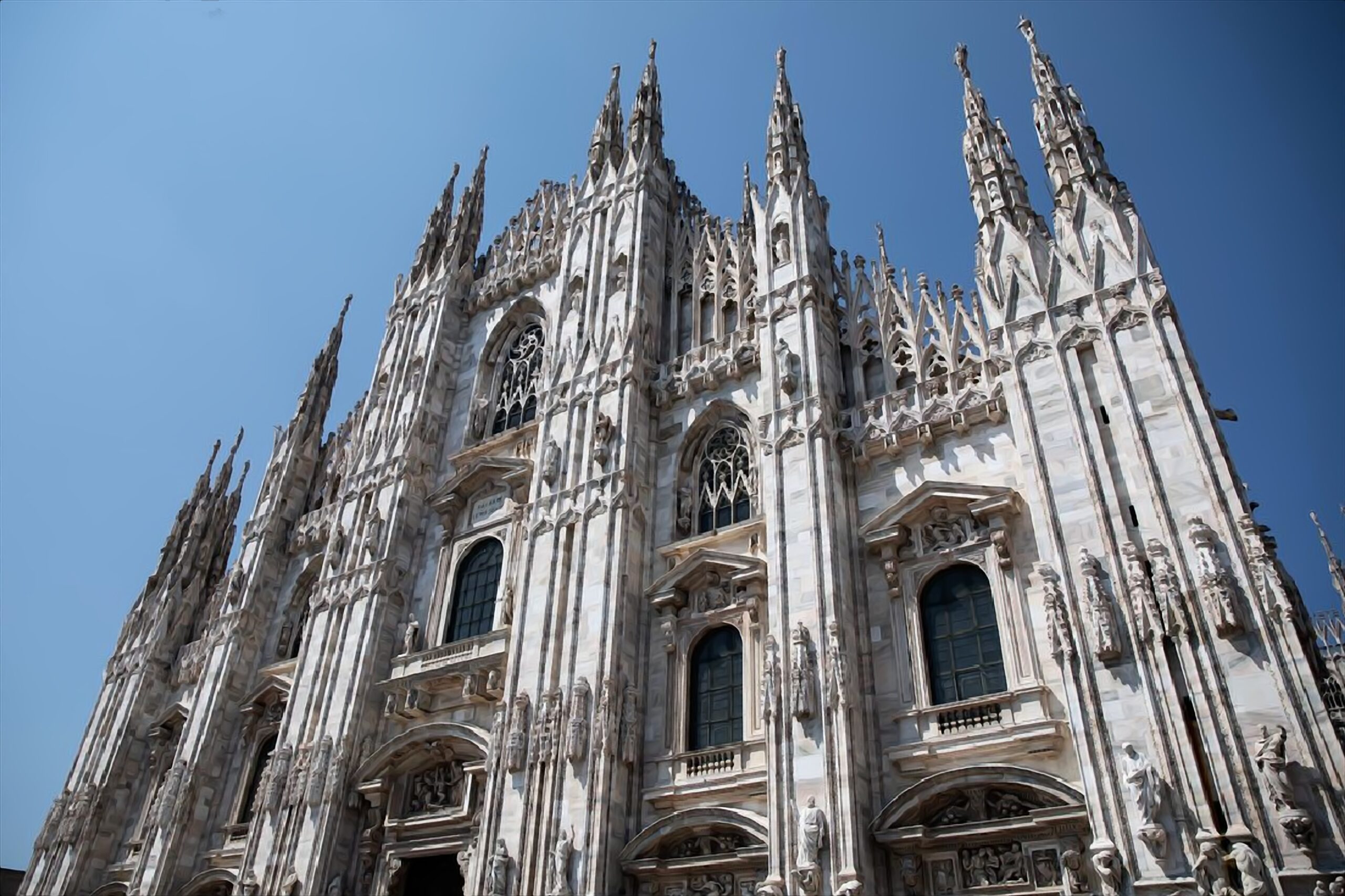 The Duomo is one of Italy’s and Europe’s largest churches and is known around the world as the “Symbol of Milan.” Humanity’s dedication to God has been shown in its majesty through centuries of Milanese heritage, which engages future generations in an unending commitment. Furthermore, the Milan Cathedral is a sacred place of worship that is closely connected to the memory and teachings of the bishops who succeeded St. Ambrose, and to the history of the millions of worshipers who assemble here every year. Both in the city’s worship and in relation to the Diocese’s activities, the Cathedral serves as a symbol of exemplarity. 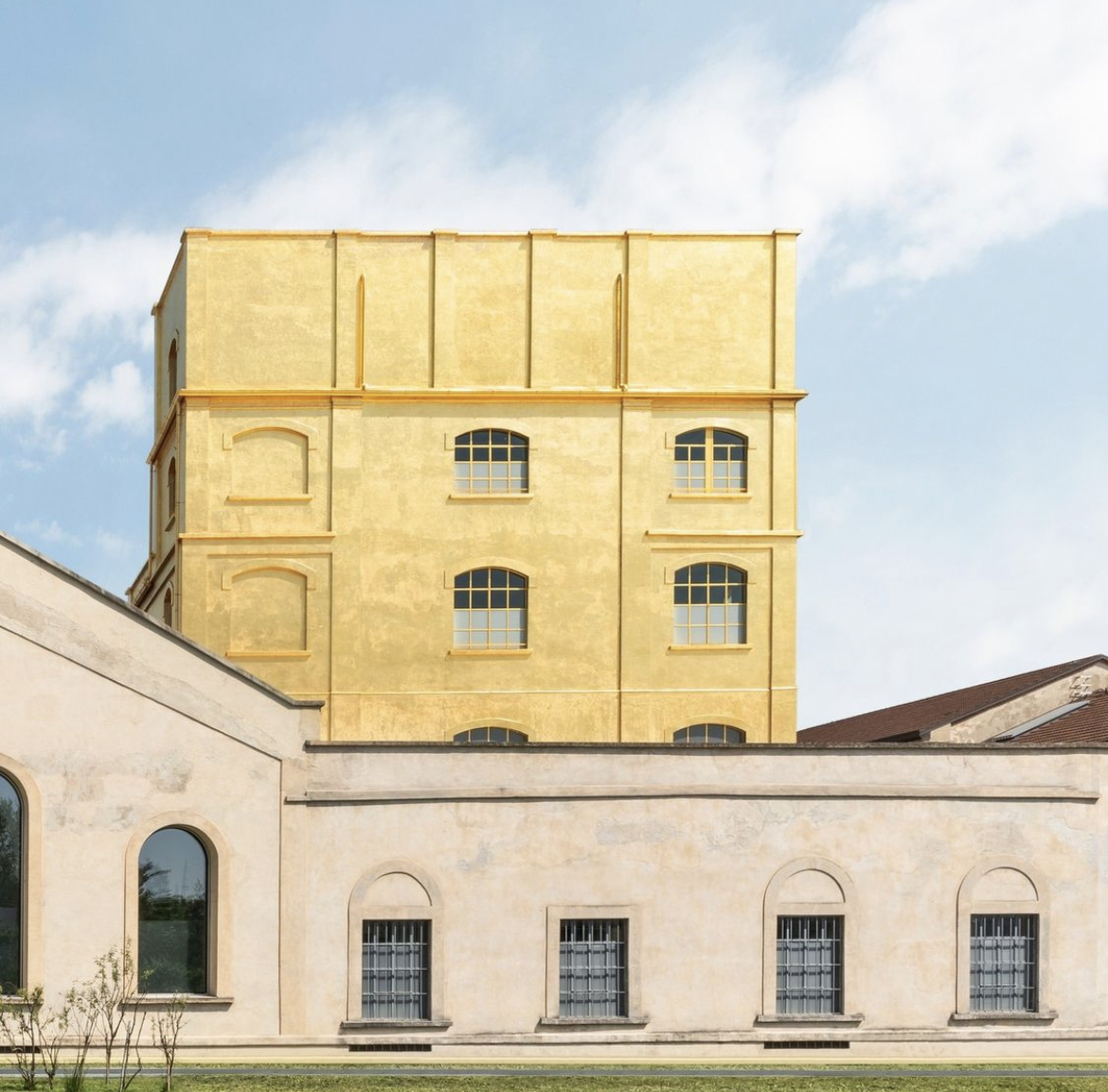 Designed by architecture company OMA, the Fondazione Prada’s Milan location enhances the variety of spaces in which art can be shown and enjoyed with the general public. The venue is the product of the renovation of a 1910s distillery into a seven-building complex with three new additions (the Torre, the Cinema, and the Piazza) in an articulated architectural configuration.

The Orto Botanico di Brera is a botanical park located behind the Palazzo Brera in the heart of Milan’s historic district. The Empress Maria Theresa of Austria commissioned Abbot Fulgenzio Vitman to remodel an existing Jesuit garden for the benefit of medical and pharmacology students in 1774. After a lengthy period of neglect and degradation, the garden was restored in 1998. 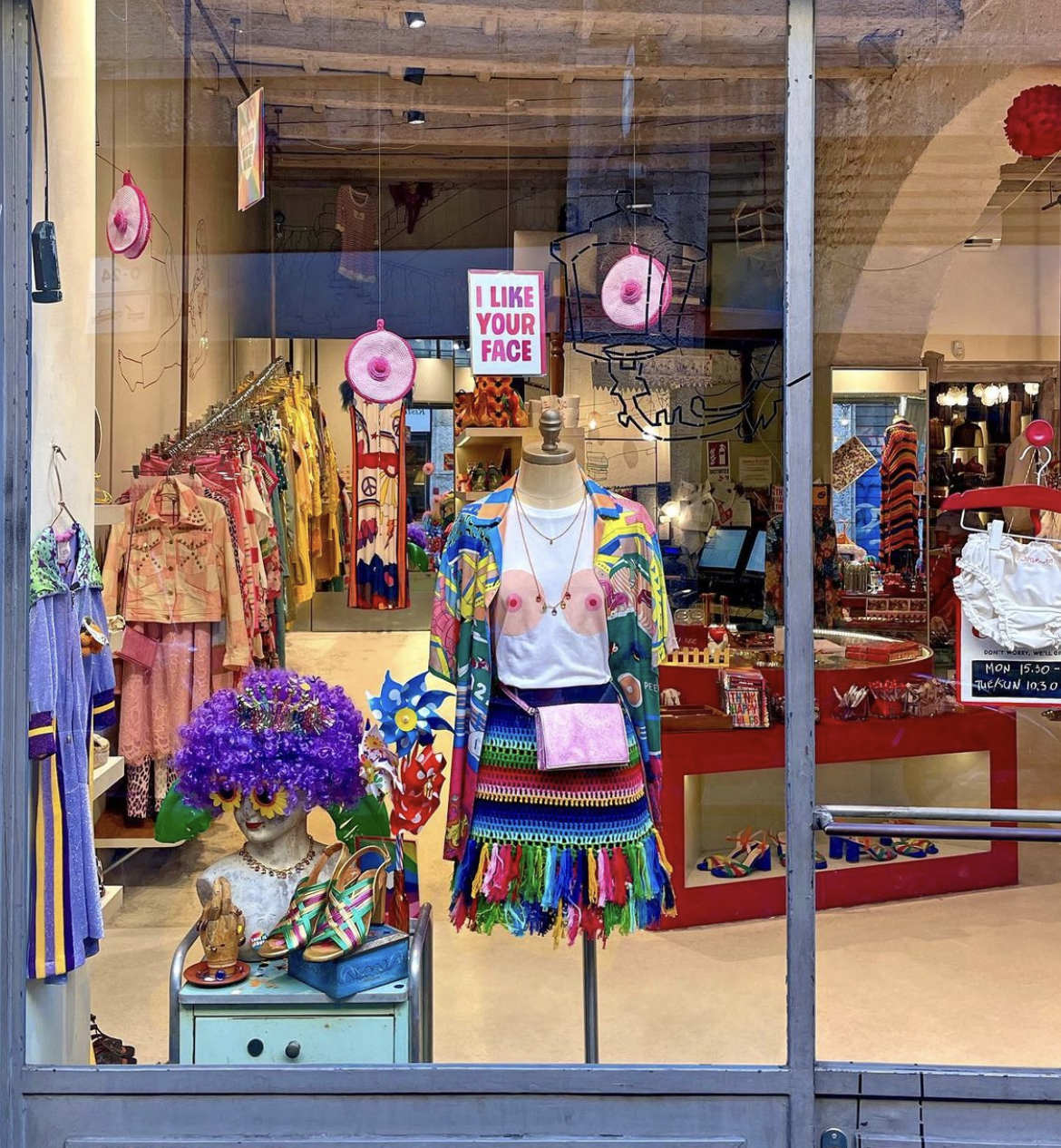 Image courtesy of Wait and See

Wait and See: A one-of-a-kind concept Store in the heart of the historical 5 VIE district in Milan.

Antonia: A unique brand mix of established and trailblazing brands for a different shopping experience.

Sartoria Teatrale Arrigo: The Arrigo Costumi Theatrical Tailoring is the work of the great tailor Arrigo Basso Bondini, who arrived in Milan after WWII from Friuli and who still cuts quartered and eighteenth-century courtes culottes or nineteenth-century redingote with absolute expertise today, at over ninety years old. The ancient sartorial cut is now only known to a few experts. 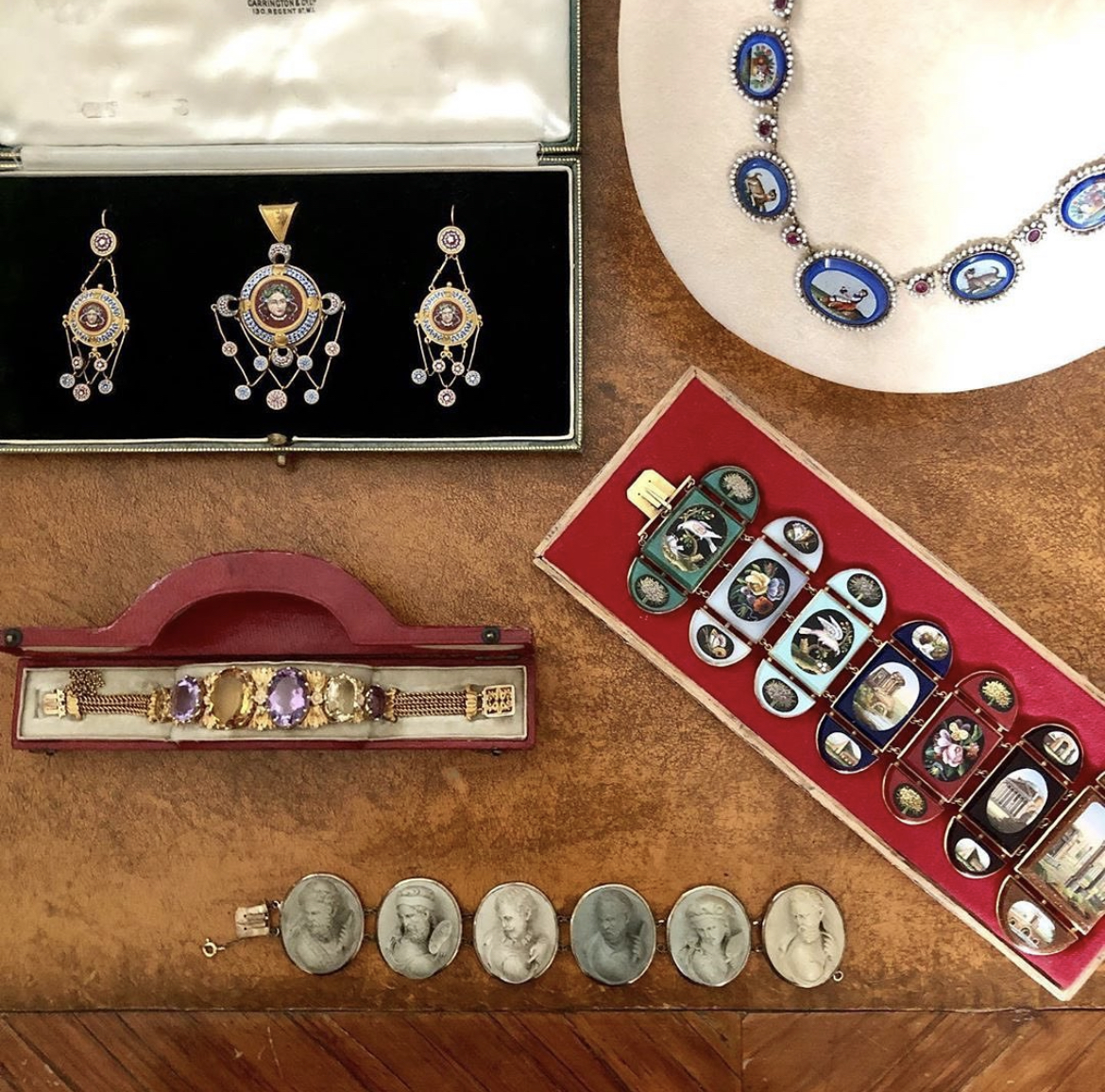 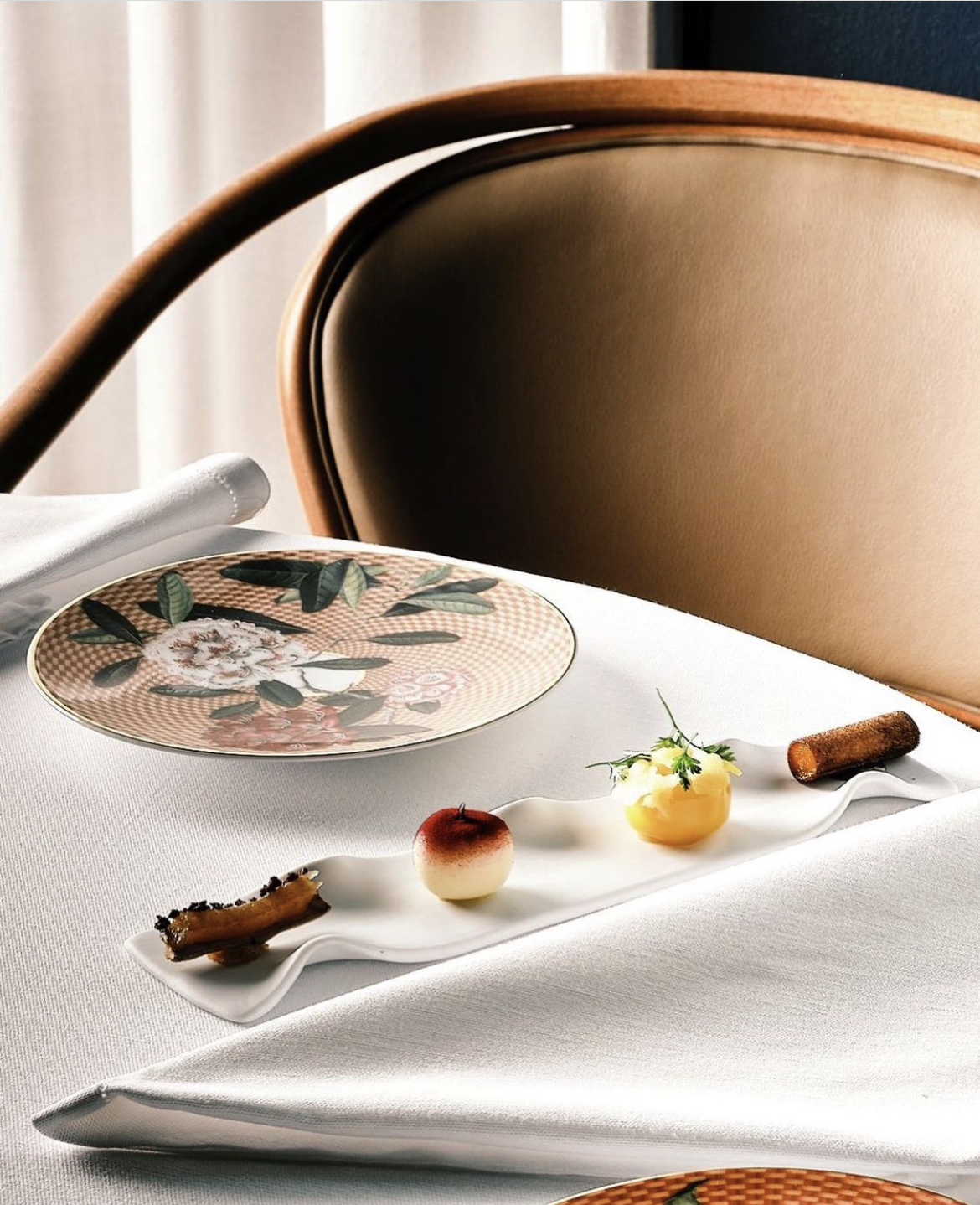 Eugenio Boer: A menu including solely Italian products articulated with timeless originality, blended with the “family” warmth that distinguishes the Milanese restaurant: a break from the past’s culinary contaminations and an ode to Italian food.

Ratana: Ratanà is a “Modern Osteria,” maybe the first of its kind in Italy, designed to stand out and contribute to the development of a sustainable culinary culture. Ratanà offers a contemporary rendition of traditional Milanese and Lombard food. Chef Cesare Battisti and his team creatively and modernly rediscover the culinary heritage of this region. Menus combine elements of our regional culinary tradition with the flexibility of modern cooking. 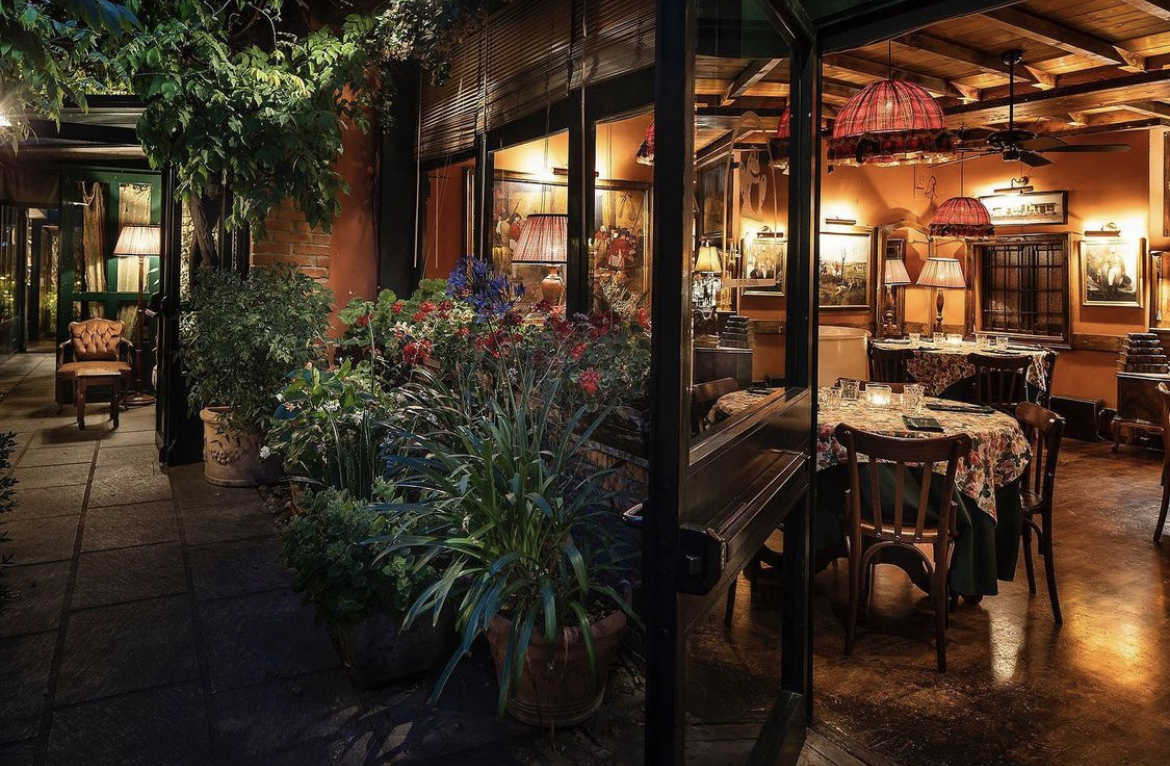 Al Garghet: At Garghet you will find the typical Milanese flavors such as yellow risotto, ossobuco, kidneys, rostisciada, casseuola and the legendary cutlet!

Then in Milan, it is fundamental before dinner to have an aperitivo. Places are endless but my personal favorite is Tommasi.

Courtyards and homes to visit:

Villa Invernizzi
Check out the pink flamingos in the back. 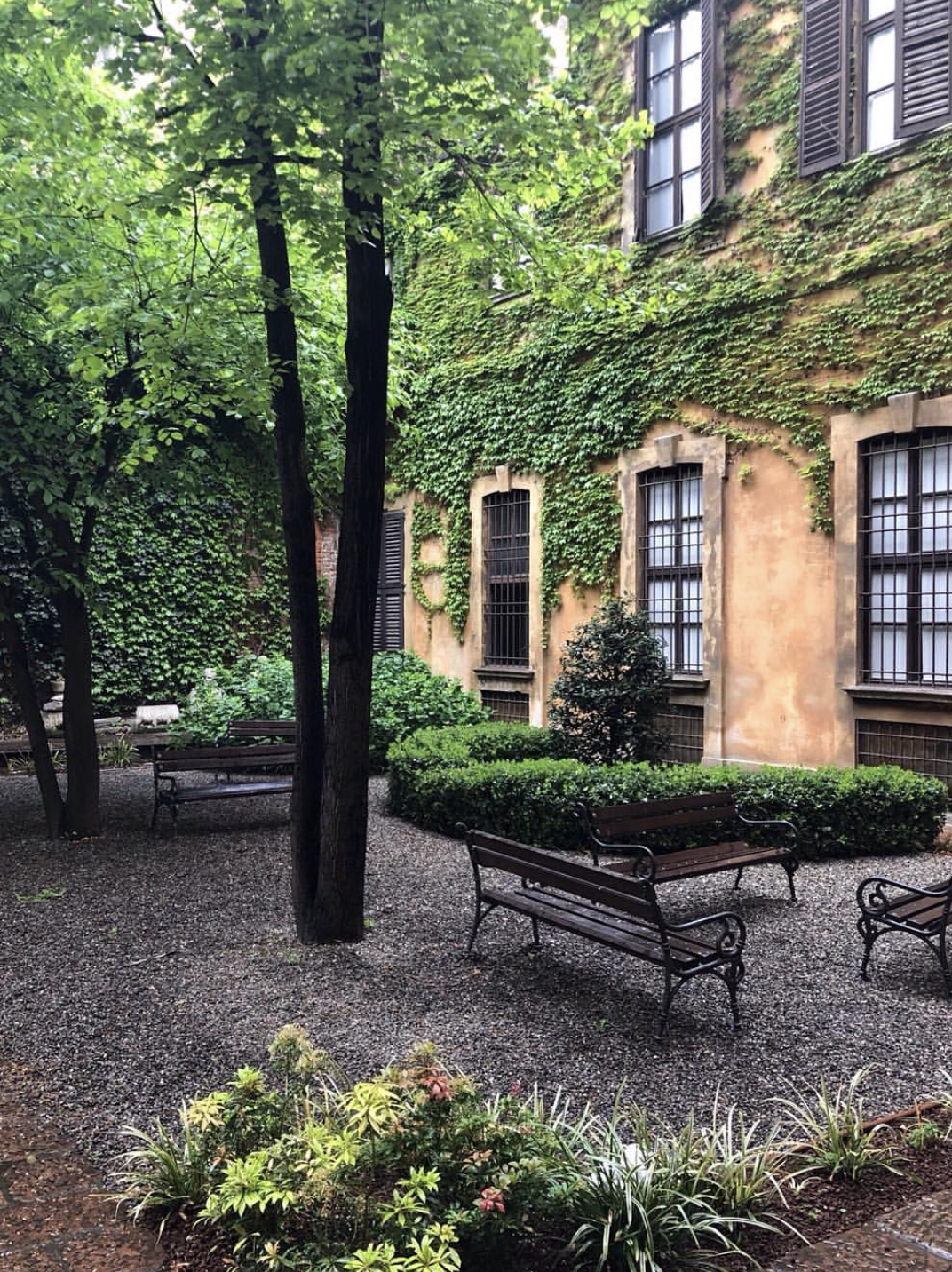 Palazzo Serbelloni
One of the first aristocratic palaces, erected on the foundation of an ancient seventeenth-century structure. The neoclassical loggia that characterizes the façade was designed by architect Simone Cantoni (1793). Over time, Palazzo Serbelloni became a location for aristocratic literary meetings and Enlightenment Gatherings, hosting Napoleon, the Prince of Metternich, and, later, Vittorio Emanuele II and Napoleon III.

Il Giardino delle Vergine – Università Cattolica del Sacro Cuore
The Garden of the Virgins, also known as the Garden of Santa Caterina d’Alessandria, is a site in Milan designated and reserved solely for women. It is located in the Catholic University and may be found at the bottom of the central portico that separates the two cloisters, near the Aula Magna. A huge window provides a view of greenery that enchants with various types of plants and trees lavishly placed in a well-ordered and walled structure.

Giardino Alessandro Manzoni
Between the Casa del Manzoni and the Palazzo Anguissola Antona Traversi is the garden. Walking through the lime trees and magnolias of this stunning green courtyard in the heart of Milan, you can see sculptures by Joan Miró, Gi Pomodoro, Jean Arp, and Pietro Cascella.

Palazzo Clerici
The home of the rich and influential patrician family of the Clerici is located in Milan in the homonymous street, called in the seventeenth century “Contrada del prestino dei Bossi”.In the eighteenth century the ancient manor house that stood here and that had belonged to theVisconti, was completely modified by the Marquis Anton GiorgioClerici (1715-1768) who made it one of the most sumptuous houses of the time.

Milan is all about design. What are your favourite places?

Glauco Cavaciuti Arte: From the outset, Cavaciuti’s goal is to promote an elegant and fun art, cultured but easy to understand, within which the personal vision of the artists dialogues with the results of the research carried out by the masters of the recent past. 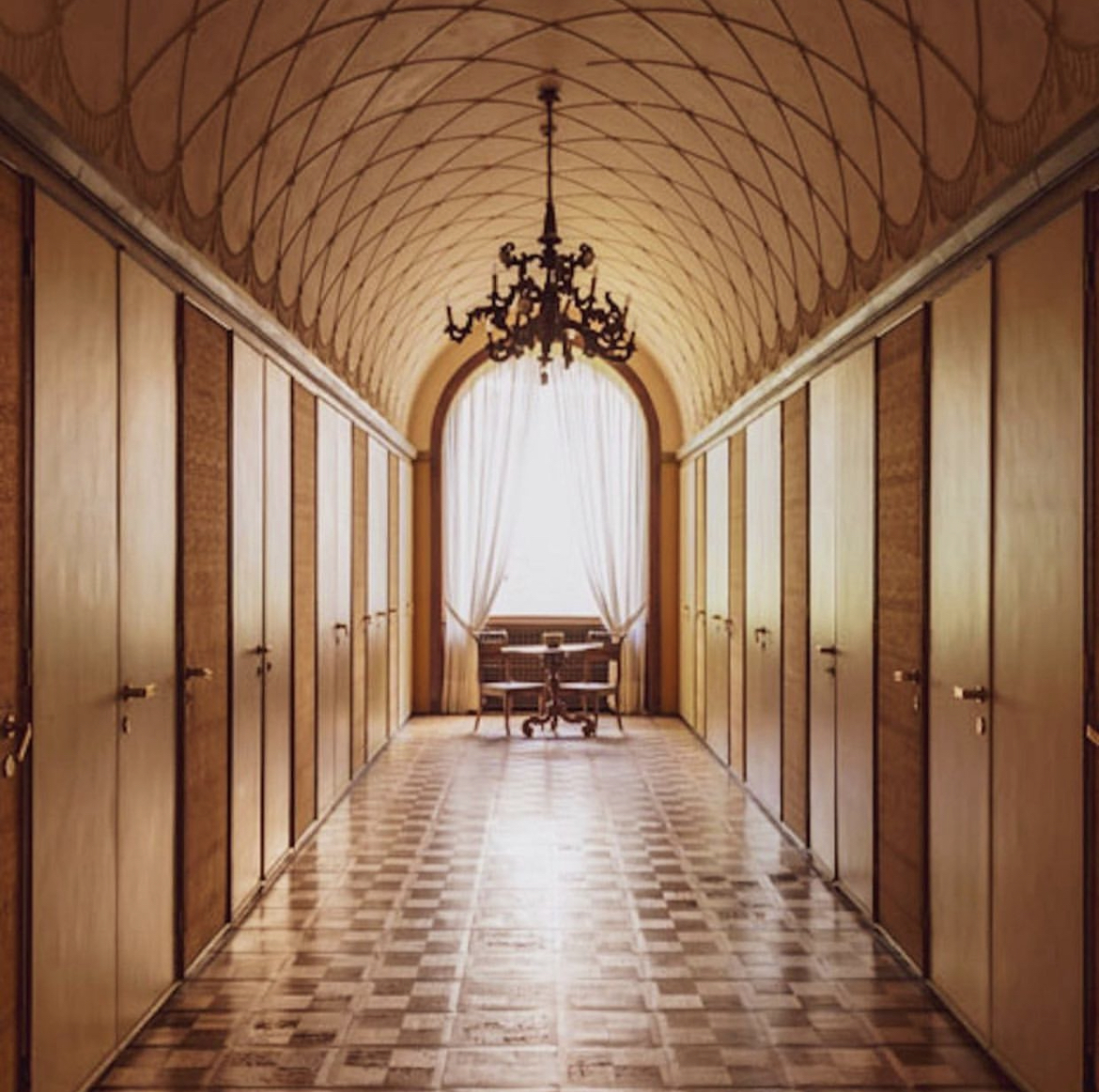 Villa Necchi Campiglio: An architectural gem. Immersed in an ample private garden with a swimming pool and a tennis court and set in the center of Milan, the Necchi Campiglio Villa was completed by the architect Piero Portaluppi in 1935. Commissioning the structure was the Necchi Campiglio family, part of the rich and elegant industrial middle class of Milan in the 1930s.

Laboratorio Paravicini: Laboratorio Paravicini, a Wunderkammer dedicated to hand-painting lovers and not only, is located in via Nerino 8, in a hidden courtyard in the historical centre of Milan. It is here that a great number of tableware has been made for twenty years. All the articles are livened up by hand-painted decorations and by printings with all sorts of patterns.

Rossana Orlandi: A well-known address among design addicts from all five continents who flock to Milan for the Design Weeks. Ro does magic here. The courtyard, filled with century-old strawberry grape vines and is the focal point of every Milanese map.

As a travel expert, what are your favorite getaways within Italy? 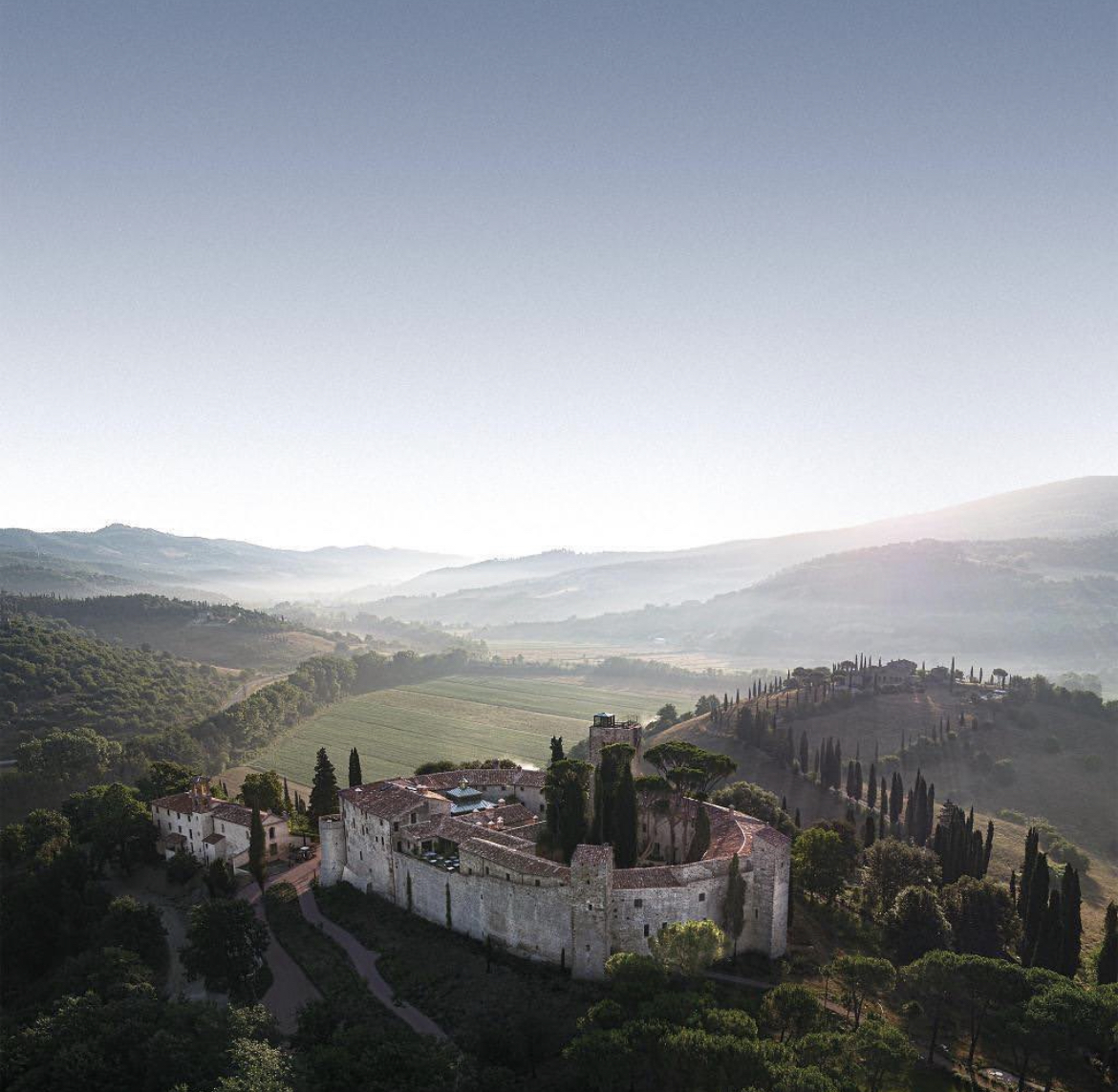 Palazzo Luce: Facing the cavea of the Roman Theater in the historical center of Lecce, Palazzo Luce is the result of the vision of Anna Maria Enselmi, a refined collector and the spirit behind an ambitious, extraordinary collective cultural project. Involving designers, artists, architects and gallerists, she has created a strikingly imaginative space in constant evolution. It is the dwelling of a collector that opens up, where the monumental volumes of the historic building establish a dialogue with the most contemporary forms of creativity.

Hotel Tyrol to rejoice in nature and the Dolomite mountains.
You can never go wrong in Italy because it is so beautiful from north to south and has so many things to see and do. 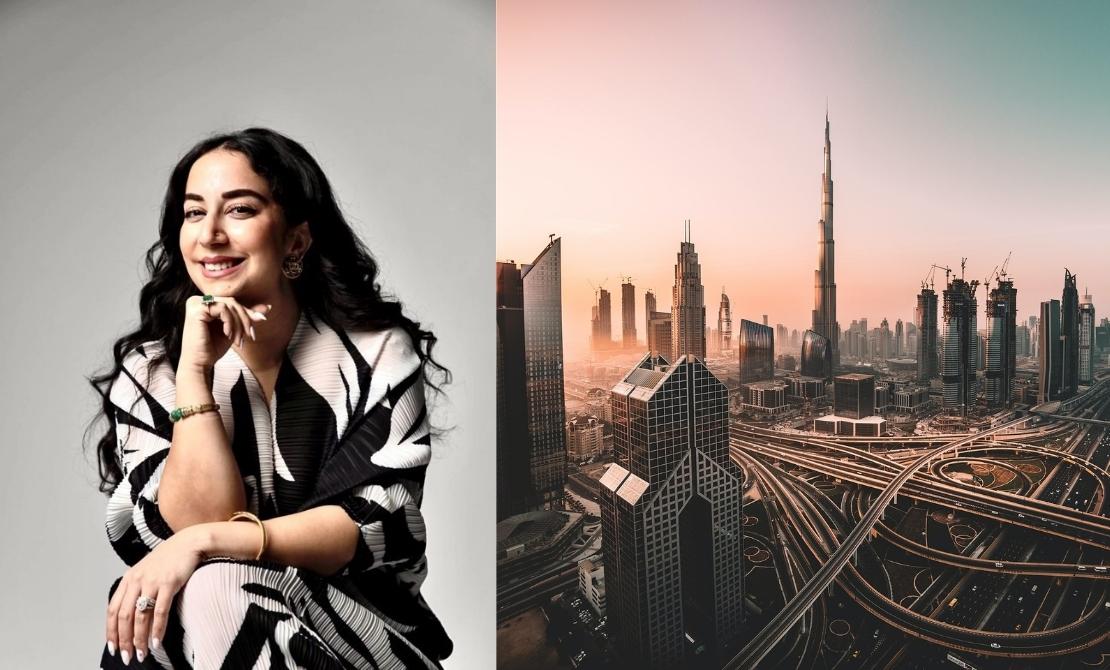 19 October 2022
(EN) Tara is the director of VIP content and communications at Tatler Hong Kong. She is a Saudi-born.... 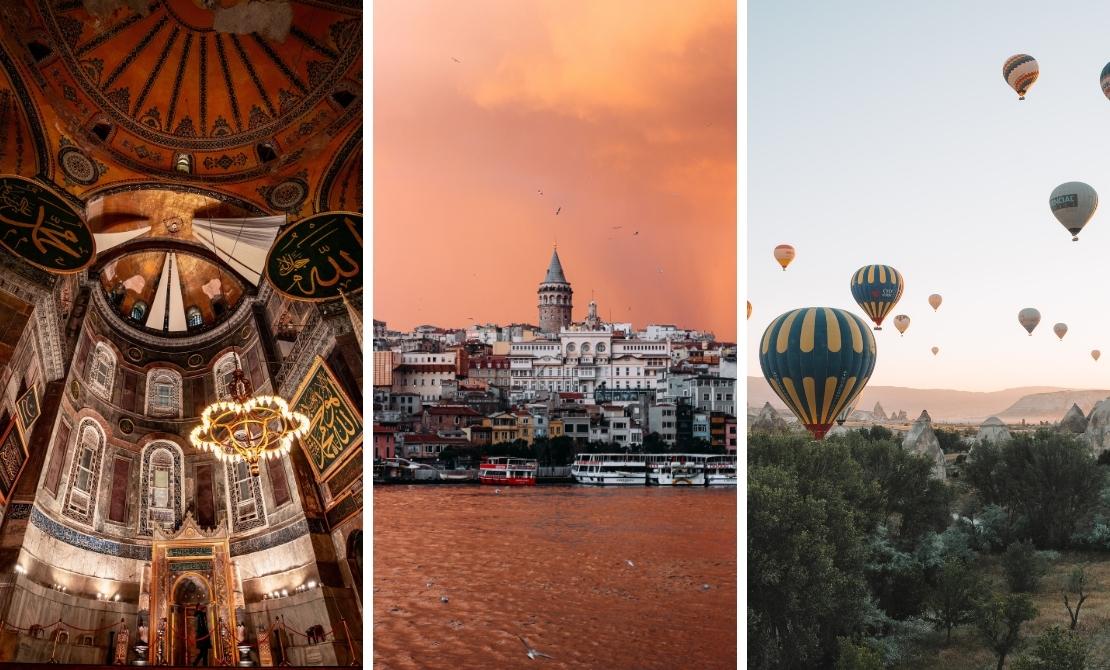 12 October 2022
(EN) Sinan Sökmen Sinan Sokmen is the founder and the CEO of Istanbul Tour Studio, a boutique trav.... 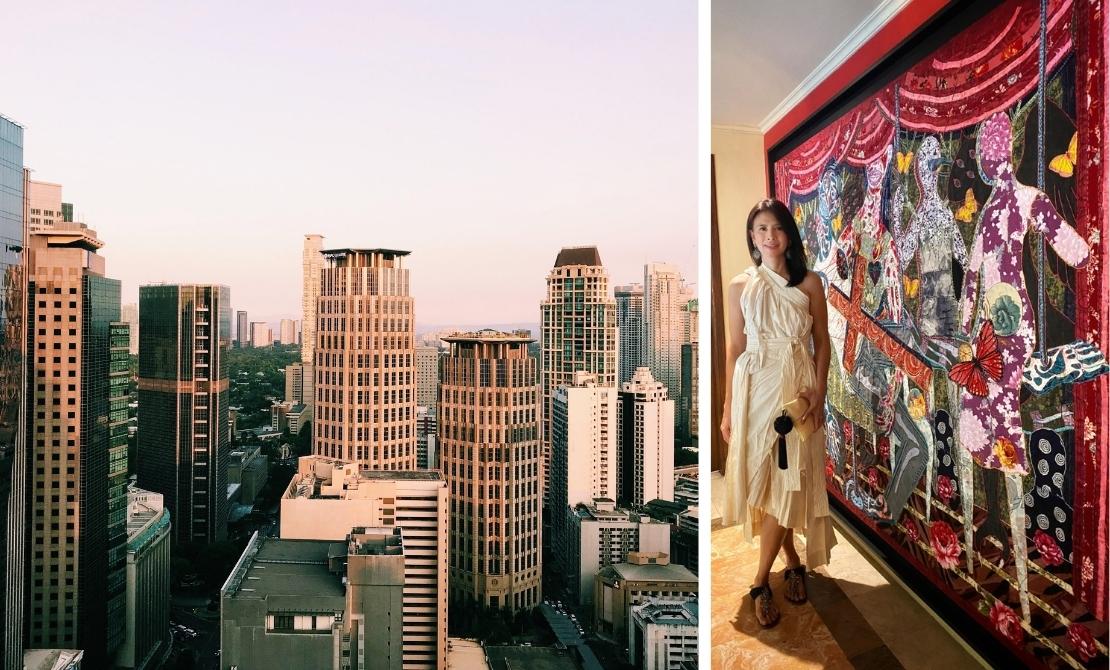