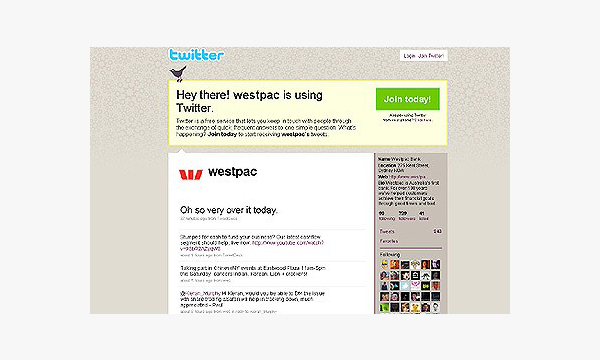 A couple of cautionary tales for execs who think interns or new grads should be in charge of social media duties.

Case One Earlier this year the words ‘Oh, so very over it’ appeared on the Twitter profile of Westpac, a leading Australian bank. Presumably the Twitter-juggling author confused his personal and employer’s accounts.

Once alerted to the faux pas, staff hit the panic button – and the delete key. But in the three hours it was online, 100s had retweeted the message, shared it with the world and saved it for posterity.

The tweet’s mopey tone also prompted a few snarky responses from followers: “You’re a bank. You made $1.6 billion first-quarter profit. Cheer up.”

Case Two More recently, American car giant Chrysler was forced to change gears after its social media agency steered them in the wrong direction.
Commenting on the carmaker’s new tagline — ‘Imported from Detroit’ – a tweet on Chrysler’s corporate account blasted: “I find it ironic that Detroit is known as the #motorcity and yet no one here knows how to f**king drive.”

Chrysler quickly apologized – for both insulting Detroit drivers and using the F-bomb – and informed followers that the tweet’s author was now out of a job.

If these tales don’t make you think twice, below are three more reasons why social media isn’t child’s play.

COMMUNICATION IS KEY Through social media, you can engage directly with consumers, vendors and potential business partners. For that reason alone, you need solid writers who can communicate clearly, represent your brand values and engage in online conversations.

BE RESPONSIVE This is key when answering a comment or a complaint. There’s no time for second guessing so writers need to be prompt, reassuring and calm in a critical situation.

UNDERSTAND PROTOCOL With experience comes maturity. Interns are more likely to blast inappropriate tweets about clients or competitors or, in the cases above, confuse their multiple Twitter accounts.