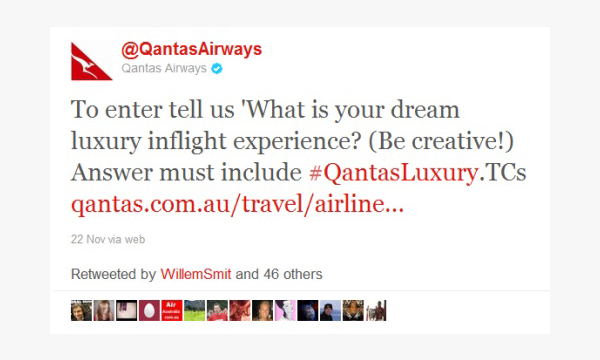 By launching an ill-timed (and poorly conceived) competition on Twitter last week, Qantas has flown into a social media storm.

Last month, Qantas caused chaos when it grounded all domestic and international flights in response to ongoing industrial action. The move left over 70,000 passengers stranded around the world and sparked tension between Qantas and its employees.

With trust and public sentiment for the brand at an all-time low, the Qantas PR team chose an odd time to launch a competition on Twitter to promote its first class. Entrants were asked to tweet their “dream luxury in-flight experience” under the hashtag #qantasluxury. The most creative entry would win…. a pair of first class Qantas pyjamas and an amenity kit! Not surprisingly, the prize wasn’t enticing enough for followers to feign goodwill or offer compliments.

Eighteen hours after the launch, the #qantasluxury hashtag was generating 25 tweets per second – nearly all of them negative. Rather than produce positive messages, the Twitter contest gave customers a platform to vent their frustrations about bad service, cancelled flights and mechanical failures (an example: Breaking news: Qantas introduce #qantasluxury class. Same as standard class, but the plane leaves the ground.@puppyOntheradio)

This tale illustrates how customers can hijack a social media campaign by expressing their cause a backlash against the airline. The major misstep, of course, was timing. The PR team seemed unaware of the public’s poor view of the brand and operated on the naive assumption that they could control the responses in such a public forum.

It will be interesting to see how Qantas pulls out of this PR nosedive. In the meantime, check out this YouTube parody now doing the rounds: